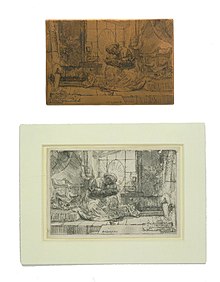 Rembrandt, The Virgin and Child with a Cat, 1654. Original copper etching plate above, example of the print below, with composition reversed.
Main article: Old master print

Daniel Hopfer, Three German Soldiers Armed with Halberds, c. 1510. An original iron etching plate from which the prints would be made. National Gallery of Art

Etching by goldsmiths and other metal-workers in order to decorate metal items such as guns, armour, cups and plates has been known in Europe since the Middle Ages at least, and may go back to antiquity. The elaborate decoration of armour, in Germany at least, was an art probably imported from Italy around the end of the 15th century—little earlier than the birth of etching as a printmaking technique. Printmakers from the German-speaking lands and Central Europe perfected the art and transmitted their skills over the Alps and across Europe. 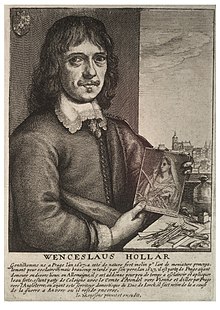 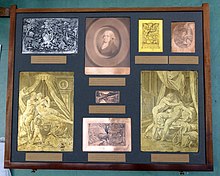 Selection of early etched printing plates from the British Museum

The process as applied to printmaking is believed to have been invented by Daniel Hopfer (circa 1470–1536) of Augsburg, Germany. Hopfer was a craftsman who decorated armour in this way, and applied the method to printmaking, using iron plates (many of which still exist). Apart from his prints, there are two proven examples of his work on armour: a shield from 1536 now in the Real Armeria of Madrid and a sword in the Germanisches Nationalmuseum of Nuremberg. An Augsburg horse armour in the German Historical Museum, Berlin, dating to between 1512 and 1515, is decorated with motifs from Hopfer's etchings and woodcuts, but this is no evidence that Hopfer himself worked on it, as his decorative prints were largely produced as patterns for other craftsmen in various media. The oldest dated etching is by Albrecht Dürer in 1515, although he returned to engraving after six etchings instead of developing the craft.[20]

The switch to copper plates was probably made in Italy, and thereafter etching soon came to challenge engraving as the most popular medium for artists in printmaking. Its great advantage was that, unlike engraving where the difficult technique for using the burin requires special skill in metalworking, the basic technique for creating the image on the plate in etching is relatively easy to learn for an artist trained in drawing. On the other hand, the handling of the ground and acid need skill and experience, and are not without health and safety risks, as well as the risk of a ruined plate.

Prior to 1100 AD, the New World Hohokam independently utilized the technique of acid etching in marine shell designs.